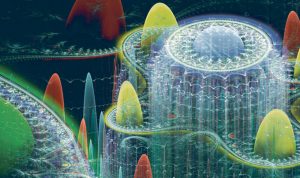 The idea of ​​the existence of parallel worlds became especially popular after astrophysicists proved that our Universe has limited dimensions — about 46 billion light years and a certain age — 13.8 billion years.
There are several questions at once. What is beyond the boundaries of the universe? What happened before its emergence from the cosmological singularity? How did the cosmological singularity come about? What awaits the universe in the future?
The hypothesis of parallel worlds gives a rational answer: in fact, there are many universes, they exist next to ours, are born and die, but we don’t see them because they are not able to go beyond their three-dimensional space, as a beetle crawling along one side of a paper leaf, see the beetle next to it, but on the other side of the leaf.
However, it is not enough for scientists to accept a beautiful hypothesis that will streamline our world view, reducing it to everyday notions – the presence of parallel worlds should manifest itself in various physical effects. And here’s the catch.
Parallel Worlds
When the fact of the expansion of the Universe was comprehensively proved, and cosmologists were engaged in building a model of its evolution from the moment of the Big Bang to the present, we faced a number of problems.
The first problem is related to the average density of matter, which determines the curvature of space and, in fact, the future of the world known to us. If the density of the substance is below the critical, then its gravitational effect will be insufficient to reverse the initial expansion caused by the Big Bang, so the Universe will expand forever, gradually cooling down to absolute zero.
If the density is higher than critical, then, on the contrary, over time the expansion will turn into compression, the temperature will begin to rise until a fiery superdense object is formed. If the density is critical, then the Universe will balance between these two extreme states. Physicists have calculated the value of the critical density – five hydrogen atoms per cubic meter. This is close to critical, although the theory should be much less.
Parallel Worlds
The second problem is the observed uniformity of the Universe. Microwave background radiation in areas of space separated by tens of billions of light years, looks the same. If the space were expanded from some kind of super-hot singularity point, as the Big Bang theory states, it would be “lumpy”, that is, different intensity of microwave radiation would be observed in different zones.
The third problem is the absence of monopoles, that is, hypothetical elementary particles with non-zero magnetic charge, the existence of which was predicted by the theory.
Trying to explain the discrepancies of the Big Bang theory with real observations, the young American physicist Alan Guth proposed in 1980 an inflationary model of the Universe (from inflatio – “bloating”), according to which at the initial moment of his birth, from 10 ^ -42 seconds to 10 ^ -36 seconds The universe expanded 10 ^ 50 times.
Since the model of instantaneous “swelling” removed the problems of the theory, it was enthusiastically accepted by most cosmologists. Among them was the Soviet scientist Andrei Dmitrievich Linde, who undertook to explain how this fantastic “bloating” happened.
In 1983, he proposed his own version of a model called the “chaotic” theory of inflation. Linde described some kind of infinite pro-universe, the physical conditions in which we, unfortunately, are not known. However, it is filled with a “scalar field” in which “discharges” occur from time to time, resulting in the formation of “bubbles” of universes.
“Bubbles” quickly swell, which leads to an abrupt increase in potential energy and the emergence of elementary particles, of which then the substance is formed. Thus, the inflationary theory provides a justification for the hypothesis of the existence of parallel worlds as an infinite set of “bubbles” inflated in an infinite “scalar field”.
If we take inflationary theory as a description of a real world order, then new questions arise. Are the parallel worlds described by it different from ours or are they identical in everything? Is it possible to get from one world to another? What is the evolution of these worlds?
Physicists say that the options can be an incredible set. If in one of the newborn universes the density of a substance is too high, then it will collapse very quickly. If the density of the substance, on the contrary, is too small, then they will expand forever.
Parallel Worlds
It is argued that the notorious “scalar field” is present inside our Universe in the form of so-called “dark energy”, which continues to push the galaxies apart. Therefore, it is possible that a spontaneous “discharge” can occur in our country, after which the Universe will “bloom with buds”, giving rise to new worlds.
Swedish cosmologist Max Tegmark even put forward the hypothesis of the mathematical universe.