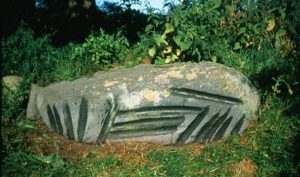 Over a thousand stones scattered throughout the island of Gotland (Gotland), Sweden, in the middle of the Baltic Sea, differ from the rest of the cobblestones with unusual man-made grooves and grooves cut in the smooth and hard surface of the rock. Patterns are always found in groups of several markings engraved side by side, and differ in their length, depth, and width.
Mysterious Gotland Troughs
At first glance it seems that these grooves appeared as if due to the fact that someone was sharpening a sharp sword or ax on a stone. Such was the first version, expressed immediately after the discovery of amazing stones in the middle of the 19th century. Subsequently, these stones are called grinding. But soon, researchers began to doubt the original theory, since the shape and size of the slits were not suitable for sharpening cold weapons of those times. Someone noted that the weapons of not only the Stone Age, but also the Middle Ages or the Viking era were too wide for such gutters.
Another evidence against the version of the grinding stones is that in the vicinity no stone ax or sword could be found that could be sharpened in such a rocky cobblestone. Archaeologists have not found any remains of ancient weapons, even in those places where, according to legend, there were some similarities of ancient forges.
Mysterious Gotland Troughs
Granite and limestone stones with unusual cuts are found not only on the island of Gotland. Boulders with mysterious troughs were found throughout Europe in countries such as Norway, Finland, France, Luxembourg and England. Mysterious cobblestones have been discovered even in India and Australia.
Similar objects found in France were attributed to the Neolithic era, and polissoirs (polishing stones, polishers) were called. Judging by the processing technology, these stones were labeled by the peoples of the same culture that built the dolmens (dolmens, stone tombs) and erected menhirs (menhirs, stone pillars). But nowhere more mysterious cuts in the rock were encountered as often as in Gotland. Here they are scattered literally all over the island. Gutters were found both on individual boulders or monolithic rocks, and on limestone slopes.
Mysterious Gotland Troughs
At one time, American astronomer Gerald Hawkins suggested that the legendary Stonehenge complex was used to study the sky. European researchers adopted this practice and also tried to find an astronomical connection in the case of almost any finds of the Stone Age. All theories came to this point when scientists came to a standstill.
The gutters from Gotland are no exception. Modern archaeologists are now confused as to whether the arrangement of grooves shed light on the secret purpose of the finds. Many of the slots actually correspond to the location of such celestial bodies as the sun and moon.
Mysterious Gotland Troughs
However, researchers explain the location of the grooves in different ways. Some believe that the gutters are a kind of lunar calendar, while other scientists believe that there is a simpler explanation. In particular, they believe that the stones were turned in different directions, just so that the sun would not blind the eyes of the masters.
To date, over 3,600 polished marks have been found on Gotland, 700 of which are found in hard limestone rocks, and the rest are distributed over 800 stone blocks scattered along the slopes of the entire island.