Extreme life forms can dwell in the universe. 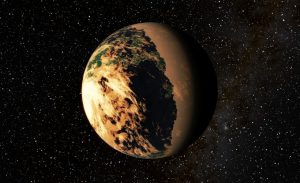 To date, astronomers have discovered in the universe already a sufficient number of different planets – from hot worlds with hot surfaces to cold frozen ice balls.
While the search continues for planets that are similar in their characteristics to our Earth, new research proves that life can exist in conditions that are significantly different from those on earth.
“When we talk about habitable planets, we mean the worlds where there is liquid water,” says Stephen Kane, a scientist at NASA’s Exoplanet Science Institute at Pasadena, California. – The planet should be at such a distance from its sun, where it is not too hot and not too cold. This area is called the “habitable zone” (habitable zone) and depends on the size and type of the star. ”
Planet habitability zone
But not all exoplanets rotate in orbits similar to the earth, that is, at a constant distance from their stars. Scientists have discovered that many planets have highly elongated elliptical orbits, and spend in the habitable zone only part of their path. They are cold worlds that heat up for a short time between long, cold winters.
Although the conditions on such planets are very different from those on earth, there is still a chance that life can exist on them. On Earth, scientists have discovered tiny life forms that can survive in extreme conditions (very high or low temperatures, excessive pressure, etc.). They are called extremophiles.
Some organisms can slow their metabolism to zero in order to survive in conditions of prolonged cold. Others are able to survive in extreme heat, if there is a protective layer of water or soil around them. Research was conducted, during which it turned out that earthly spores, bacteria and lichens are able to survive in extreme conditions of the Earth and space.
According to scientists, the habitability zone around the star may be larger than previously thought. Planets where living conditions are hostile to humans can be an ideal habitat for extremophiles, such as bacteria and lichens. After all, even on our Earth, life at the early stages developed in much more severe conditions than now.
The researchers note that suitable conditions for life can exist not only on the exoplanets themselves, but also on the satellites of large gas giants like Jupiter. The satellites of the planets that constantly reside or spend some time in the habitable zone may also be suitable for life.
For example, Saturn’s largest satellite, Titan, has a dense atmosphere, but is located quite far from the Sun and too cold for life to exist on its surface. However, if Titan were closer to the Sun, then it would be possible to find a sufficient amount of water and suitable conditions for life on it.
So far, scientists can not accurately determine the availability of suitable conditions for life on the already discovered exoplanets, since they do not have enough data about their atmospheres. Nevertheless, research results show that life in the Universe can exist in a wide variety of forms, and not only on Earth-like planets.