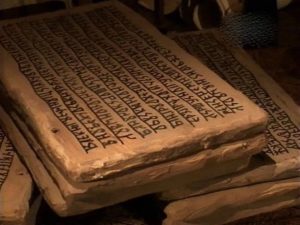 The time has come for another unsolved mystery of the 20th century from our already half-lost series of secrets of the 20th century. The Veles Book is a written text first published in the 1950s by Russian emigrants Yu. P. Mirolyubov and Al. Kurom (A. A. Kurenkov) in San Francisco. According to the stories of Mirolyubov, he was written off from the wooden planks lost during the war, allegedly created around the 9th century. It contains legends, prayers, legends and stories about the ancient Slavic history from about the VII century BC. er until the ninth century n. er
Unsolved mystery of the 20th century: “The Book of Veles” END_OF_DOCUMENT_TOKEN_TO_BE_REPLACED