Unsolved mystery of the 20th century: “The shooting of Russian Emperor Nicholas II and members of his family” 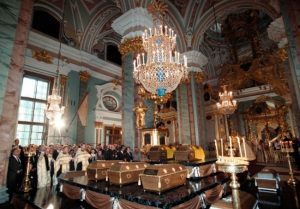 Dear friends, I would like to continue the series of unsolved mysteries of the XX century. This time I would like to tell you about the execution of Russian Emperor Nicholas II and members of his family. On the night of July 16-17, 1918, Russian Emperor Nicholas II, his wife, Empress Alexandra Feodorovna, their children, Grand Duchesses Olga, Tatiana, Maria, Anastasia, the heir to the Tsarevich Alexei, and also the leib-medic Evgeny Botkin, the valet Alexei Troupe, the room girl Anna Demidova and the cook Ivan Kharitonov.
Unsolved mystery of the 20th century: “The shooting of Russian Emperor Nicholas II and members of his family”
The last Russian emperor Nikolai Alexandrovich Romanov (Nikolai II) took the throne in 1894 after the death of the father of Emperor Alexander III and reigned until 1917, until the situation in the country became more complicated. On March 12 (February 27, old style) of 1917, an armed uprising began in Petrograd, and on March 15 (March 2, old style) of 1917, at the insistence of the Provisional Committee of the State Duma, Nikolai II signed the abdication from the throne for himself and his son Alexei in favor of the younger Brother Mikhail Alexandrovich.
After the abdication from March to August 1917, Nikolai and his family were under arrest in the Alexander Palace in Tsarskoye Selo. The Special Commission of the Provisional Government studied the materials for the possible trial of Nicholas II and Empress Alexandra Feodorovna on charges of treason. Not finding evidence and documents that clearly exposed them to this, the Provisional Government was inclined to expel them abroad (to the UK).
In August 1917, the arrested were transported to Tobolsk. The main idea of ​​the Bolshevik leadership was the open trial of the former emperor. In April 1918, the All-Russian Central Executive Committee decided to transfer the Romanovs to Moscow. For the trial of the former tsar, Vladimir Lenin spoke, the main accuser of Nicholas II was supposed to be made by Leon Trotsky. However, information appeared on the existence of “White Guard conspiracies” for the abduction of the king, the concentration of “officers-conspirators” in Tyumen and Tobolsk for this purpose, and on April 6, 1918, the Presidium of the Central Executive Committee decided to transfer the royal family to the Urals. The royal family was transported to Yekaterinburg and located in the Ipatiev house.
The uprising of the White Czechs and the offensive of the White Guard troops on Yekaterinburg accelerated the decision to shoot the former tsar.
To organize the execution of all members of the royal family, Dr. Botkin and the servants who were in the house, was assigned to the commandant of the House of Special Purpose, Yakov Yurovsky.
Unsolved mystery of the 20th century: “The shooting of Russian Emperor Nicholas II and members of his family”
The execution scene is known from the investigative protocols, according to the participants and eyewitnesses and the stories of direct perpetrators. Yurovsky spoke about the shooting of the royal family in three documents: “Note” (1920); “Memoirs” (1922) and “Speech at the meeting of the old Bolsheviks in Yekaterinburg” (1934). All the details of this atrocity, transmitted by the main participant at different times and under completely different circumstances, agree on how the royal family and its servants were shot.
According to documentary sources, you can set the start time of the murder of Nicholas II, his family members and their servants. The car that delivered the last order for the destruction of the family arrived at half past one in the night from July 16 to July 17, 1918. After that, the commandant ordered the medical physician Botkin to wake the royal family. It took the family about 40 minutes to pack it, and then it and the servants were transferred to the basement room of this house, which overlooks Voznesensky Lane. Tsarevich Alexei Nicholas II carried in his arms, because he could not walk because of illness. At the request of Alexandra Fedorovna, two chairs were brought into the room. On one she sat on the other Tsarevich Alexei. The rest are located along the wall. Yurovsky led the firing squad into the room and read the sentence. After the death was confirmed, all the corpses began to be carried to the truck. At the beginning of the fourth hour, at dawn, the corpses of the dead were taken out of the Ipatiev house.
The remains of Nicholas II, Alexandra Feodorovna, Olga, Tatiana and Anastasia Romanov, as well as persons from their entourage, who were shot in the Special Purpose House (Ipatiev House), were discovered in July 1991 near Yekaterinburg.
On July 17, 1998, the burial of the remains of the members of the royal family was held in the Peter and Paul Cathedral of St. Petersburg.
Unsolved mystery of the 20th century: “The shooting of Russian Emperor Nicholas II and members of his family”
In July 2007, remains belonging to Tsarevich Alexei and his sister, Grand Duchess Maria, were discovered.
In October 2008, the Presidium of the Supreme Court of the Russian Federation decided on the rehabilitation of Russian Emperor Nicholas II and his family members. The Prosecutor General’s Office of Russia also decided to rehabilitate members of the imperial family — the great princes and princes of blood executed by the Bolsheviks after the revolution. They were rehabilitated servants and approximate royal family, who were executed by the Bolsheviks or subjected to repression.