Civilization from the planet Proserpine 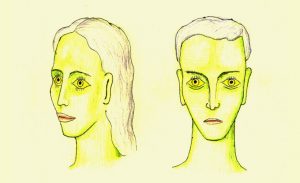 Humanoid civilizations are widespread in space. One of these civilizations lives on the planet Proserpine, located on the outskirts of our galaxy. Proserpins are highly intelligent humanoids from 1.5 to 2.5 meters tall. Among them, both men and women, thin-boned individuals, pronounced asthenic (quickly tired), lean and refined, differ.
Their skin has a greenish tint due to the lack of sunlight on the planet. The eyes are greenish-yellow, rather large and prominent. The bones of the facial skull are thin, connected by cartilage, lip rollers of a slightly pink color. Ears strongly elongated, ear canal in the form of a slit. The forehead bumps are well marked on the forehead. Humanoids there also exist in the ether-energy state (information N.Yu. Remizova-Babushkina).
The fact that the contact came the representatives of the planet Proserpine, reported and another source. One of the aliens called Forces. Outwardly, he looks like a man, but his body seemed blurry, transparent, as if it were composed of ether. Height approximately 1.5 meters. The head is slightly smaller than in humans, but the ears are large, with the earlobes sagging very low. The legs and arms are very flexible, as if the hinges are in the elbow knee joints. Outwardly proserperists are nice and benevolent. Their body consists of energy and jelly-like liquid. They live up to 1000 years by their numbers.
There are no sexual relations or genitalia, but nevertheless, they have families. Children are born by combining parts of the energies of males and females in a special capacity. An energy embryo is formed, which is given a program – appearance and knowledge. Proserper feeds on solar energy through certain transmitters. Organic matter is eaten in small quantities.
The planet is ruled by a president-ruler. The aliens are able to send their energy guards to other planets. In the affairs of other worlds do not interfere. The Prozerpip group works on contacts (the study of human contact opportunities). The group includes Proserperists: Sil, Lunkaze and others.
The base spacecraft has the shape of a ball and during the flight it resembles a comet – the hull begins to glow with a bright yellow light, and behind it, a fiery plume remains. Small circumplanetary modules are disc-shaped and resemble typical “flying saucers”. Diameter is about 10 meters, height is 3-3.5 meters. The module is controlled by one pilot. Close visual contacts with newcomers occurred in the Volgograd region (1980), contactor Andrei Gorely; from 199 year – contacter Irina Egorova (at that time she was 11 years old).
There are several other descriptions of aliens from the planet Proserpine. They call themselves “akapy” (Akapa is the second name of the planet Proserpina). The newcomers have a high growth – up to 3 meters, the age reaches 900 years. Their mind is 19 orders higher than ours (most likely, the contactees misunderstood and the difference is only 19 times). Skin color is blue-gray. The eyes are very kind, heads, noticeably tapering to the bottom with neat hair. Long and straight noses, lips narrow and short.
The aliens are able to control our equipment at a distance, their images can be recorded with cinema-photographic equipment. They communicate between themselves and with people in a telepathic way, as well as with the help of astral exits. They are in contact with those people who have changed their thinking, increased sensory sensitivity. One of the methods of contact is psychography, with the help of which written testing of the contactee’s thinking is carried out. Then the contact can be continued in the form of a telepathic dialogue.
The spacecraft is called “Nemlung.” Crew – 5 humanoids. The aliens gave their names: Munt, Sutur, Param, Rusam, Nikta, Mikta, Adom. In addition, they reported that people from other galaxies live on Earth.