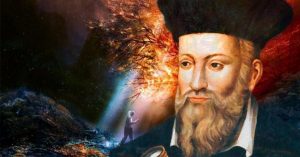 On the 14th of December, 1503, in the Provencal town of San Remy, around noon, was born the most amazing of people ever living on earth. Michel Nostradamus, for whom the boundaries of time and space were not a reality and about which everyone who studied him was rightly said, therefore, that he lived, lives and will live for a long time.
Nostradamus inherited his surname from his father – notary Jacques – who was so baptized during the transition from Jewry to Christianity, several years after the birth of Michel. Both of his grandfathers were doctors, one of whom was an adviser to King Rene. His family on the part of his father and mother consisted of scientists, respected by the powers that be and loved by the people. As a child he was sent to study in the city of Avignon. It is said that Michelle delighted the teachers with his intelligence, his memory was so accurate and fast that he recited entire chapters by heart after the first reading.
In 1525, when Nostradamus was a 22-year-old medical student, the sad events in Provence made it possible to prove his loyalty to people and science. The plague that devastated the city of Montpellier and the surrounding areas, found in it a mortal enemy. The plague in those days was a terrible scourge. People who contracted the disease, refused any hope of recovery, sewed a white shroud for themselves and, as it were, were present at their own funerals during their lives.
Professor of the old medical faculty of the city of Montpellier, learning about the successes of Nostradamus in the fight against plague, invited him to the university to give him a doctoral degree. The young doctor soon left Montpellier again, to visit Provencal villages that witnessed successful methods of treatment. His journey has become a real triumph. The patients he saved met Nostradamus at the gates of their homes. Young men and women walked in front of him and threw flowers on his way.
About 20 years later (in 1546) in the city of Hey, the plague broke out again. The city committee unanimously invited Nostradamus to fight it. In this case, Nostradamus experienced the action of a disinfecting powder, the description of which he devoted several chapters in one of his medical books. Its title is very curious for the historian:
“An excellent and very useful brochure about many excellent recipes, divided into two parts. The first part teaches us how to make different lipsticks and perfumes to decorate the face. The second part teaches us to prepare different kinds of jams from honey, sugar and wine. Compiled by master Michel Nostradamus – MD from Salon in Provence. Lyon 1572 “.
Obviously, without a part interpreting the practical method of making jam, the medical book of the 16th century did not diverge, even if it was written by Nostradamus. The table of contents introduces the contents of the book. Here are some extracts:
How to make powder, clean and whiten teeth, as if they were red and black, and also a way to give a breath to a pleasant smell. Another way, even more perfect, is to clean the teeth, even those that are badly damaged by rot … A way to prepare a kind of soap that makes white and soft hands and has a sweet and tasty smell … A way to prepare a kind of distilled water in order to best decorate and whitewash your face …
Another way is to make the beard hair blond or gold, and also to destroy too much fullness of the body. ”
In order to properly understand the hygienic concerns that Nostradamus testifies in this book, it should be remembered that, for example, in the courtesy manual, published 200 years later, it is formally forbidden to use water for washing, “because it makes the face more sensitive to winter to cold and summer to heat. ”
About the national hygiene of the 16th century can be judged by the fact that even King Louis X1U suffered from insomnia due to bedbugs. The Louvre represented a disgusting sight: visitors sent their natural necessities everywhere: in the courtyard, on the stairs, on the balconies. All this was done in full view of everyone and without any restraint. The sewage from the windows of houses left dirty and disgusting traces on the walls and eaves.
In 1544, Nostradamus, after the death of his two children and wife, married a second time and settled in the city of Salon. Six years later, the 47-year-old Nostradamus began writing a series of prophecies, seven of which he published in 1555 in the city of Lyon. On the cover of this edition it is indicated that the book is completed by printing on May 3, 1555. The success of these prophecies was extraordinary. Everyone wanted to read them, for Nostradamus also proved his prophetic gift in life. There are still known about 90 editions of his book printed in France, as well as in England and especially in Holland, where the most luxurious editions of the Prophecies have been published, some of which are provided with a portrait of the author and illustrations of future events.