Riddle of the Stones Iki 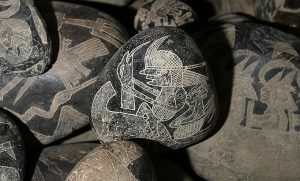 On the Pacific coast of southeastern Peru is the Ica region, consisting of five provinces – Ica, Nazca, Pisco, Chincha and Palpa. These places are known since ancient times: the first settlers appeared there more than 10 thousand years ago. It was there that such ancient Indian cultures of the pre-Inca period flourished as Ica, Nazca and Paracas.
Some relics of these highly developed cultures are amazing. For example, mysterious drawings made on the soil in the Nazca desert are figures of people, animals, birds and fish of gigantic size. They are scattered on a huge plateau with a length of 50 kilometers and occupy an area of ​​350 km2.
Until now, scientists are arguing about the appointment of these giant images. According to the researcher Maria Reiche, these drawings are part of a large calendar, according to which all agricultural work was carried out. At the same time, many believe that a map of the Universe was drawn on the Nazca plateau, and once this area served as a landing platform for space ships.
The capital of the region of Ica is the city of the same name Ica, founded in 1563 by the Spanish conquistador Jeronimo Luis de Cabrera y Toledo. In the vicinity of this unremarkable Peruvian town, one of the most interesting archaeological finds was made – the so-called Ica stones.
In 1961, after the flood of the Ika River in the Okukaha area, professional hunters for antiquities, the so-called “ukeros”, actively excavated in search of gold and various ancient artifacts.
They discovered a huge number of stones washed by the river, which depicted scenes from the life of Indians who had previously inhabited this land, organ transplant surgeries, prehistoric animals, geographical maps with unknown continents, aircraft of various designs, they put on the “black” antiquarian market of Peru .
Among the first collectors and researchers of stones in the city of Ica were the brothers Pablo and Carlos Soldi (Pablo & Carlos Soldi), who, realizing the great scientific value of these ancient stones, tried to attract the attention of professional archaeologists to this phenomenon, but to no avail.
The professor of medicine, the dean of the medical faculty at the University of Lima, Javier Cabrera, is a direct descendant of the founder of the city of Ica, made these stones truly famous.
Cabrera became interested in collecting stones with engraved drawings in 1966, when he was given a stone with a cross-cut fish on his day of his 42th birthday, dedicated to collecting and exploring vu for the rest of his life.
The collection began in 1967 with the purchase of 341 stones from the Soldi brothers for $ 45, among which were several samples depicting complex surgical operations. And Javier Cabrera, being a professional surgeon, could not help but pay close attention to them.
This was the beginning of his activity in collecting information on engraved stones and their collecting. He spent all his free money on this and, despite the accusations of falsification and total rejection by official science, he continued his work for decades.
Cabrera revealed a pattern: the images on the stones, which he called glyptolites, can be arranged in a series containing from 6 to 200 drawings. And as the story progressed, the size of the stones, as a rule, increased, and the method of drawing the image also changed – from engraving to the low relief technique. In his opinion, such series could make up an entire library, as if someone wanted to pass on knowledge to subsequent generations.
Ica stones are andesite (Andean variety of granite), run-in water flows. The stones are covered with natural oxide patina, including the engraving lines, which do not have chips or irregularities, which indicates that the stones were buried almost immediately after production.
The sizes and weight of stones is different – from 15-20 grams to half a ton with a height of 1.5 meters. The most common size corresponds to watermelon. The color is predominantly black, but gray, beige and pinkish are found. Interestingly, the density of stones with engraving is much higher than the density of untreated pebbles of the same rock, known in the basins of local rivers.
In 1996, Cabrera opened the “Museum of Engraved Stones” in the center of Ica, where more than 11,000 stones from its collection are represented. It is currently called the Javier Cabrera Science Museum.
The collection of Iki stones poses a huge amount of questions for researchers and makes us think about the very basics of our ideas about the past of the planet and human civilization, because Ica depicted on stones does not at all correspond to the modern understanding of the history of the world.